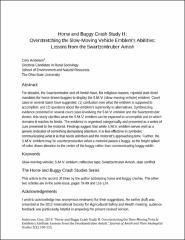 For decades, the Swartzentruber sect of Amish have, for religious reasons, rejected state-level mandates for horse-drawn buggies to display the S.M.V. (slow-moving vehicle) emblem. Court cases in several states have suggested: (1) confusion over what the emblem is supposed to accomplish, and (2) questions about the emblem's superiority to alternatives. Synthesizing evidence presented in several court cases involving the S.M.V. emblem and the Swartzentruber Amish, this study clarifies what the S.M.V. emblem can be expected to accomplish and in which domains it reaches its limits. The evidence is organized categorically and presented as a series of cues presented to the motorist. Findings suggest that while S.M.V. emblem serves well as a generic indicator of something demanding attention, it is less effective in symbolic communicating what it is that needs attention and the motorist’s approaching time. Further, the S.M.V. emblem may be counterproductive when a motorist passes a buggy, as the bright splash of color draws attention to the center of the buggy rather than communicating buggy width.