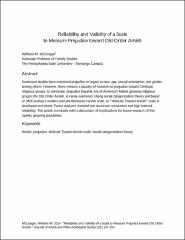 Numerous studies have examined prejudice in regard to race, age, sexual orientation, and gender, among others. However, there remains a paucity of research on prejudice toward Christian religious groups. In particular, prejudice towards one of America's fastest growing religious groups, the Old Order Amish, is rarely examined. Using social categorization theory and based on McConahay's modern and old-fashioned racism scale, an "Attitude Toward Amish" scale is developed and tested. Factor analysis revealed one dominant component and high internal reliability. The article concludes with a discussion of implications for future research of this rapidly growing population.