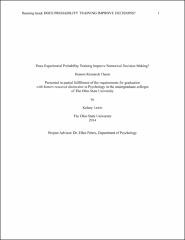 Numeracy, the ability to understand and use mathematical concepts, is a crucial skill in which many lack proficiency. The less numerate are more likely to exhibit a number of cognitive biases that can result in suboptimal decision making. Two of these are probability insensitivity and attribute framing effects. Though prior research has shown a correlation between numeracy and the suppression of these phenomena, a causal link has yet to be determined. In an effort to demonstrate causation, the present study used a probability-training paradigm that targeted intuitive numeracy abilities. It was hypothesized that participants who received probability training would exhibit greater probability sensitivity and smaller attribute framing effects compared to untrained participants. Ohio State students (N = 339) were randomly assigned to one of two conditions. Participants in the training condition watched series of flashing faces, estimated the probabilities represented by each series, and received accurate feedback. Participants in the no training condition watched the same series but did not estimate probabilities nor receive probability-related feedback. All participants then judged the riskiness of a number of risk scenarios in which we manipulated the probability of an adverse outcome, allowing us to assess probability sensitivity. They also judged the attractiveness of several scenarios, either in the positive or negative frame, allowing us to assess framing effects. The experiment ended with a numeracy scale. Results reveal non-significant effects of experiential probability training on probability sensitivity and attribute framing effects overall, but effects of numeracy and training were found for some scenarios individually.