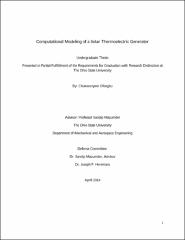 Solar to electrical power conversion technologies have become a popular alternative to conventional means such as combustion of fossil fuels because no greenhouse gases are produced. One of the emerging technologies is a solar thermoelectric power generation. A solar thermoelectric generator (STEG) converts radiant energy from the sun into electricity by creating a temperature difference across a thermoelectric material. The solar energy is first absorbed by an absorber plate that heats up and creates the afore-mentioned temperature difference. As opposed to solar photovoltaic cells that utilize only the visible part of the sun’s energy spectrum, a STEG utilizes the entire energy spectrum—most notably the infrared part. This noteworthy advantage makes this technology promising. Advancements in thermoelectric material research have proved that STEGs are a viable option for small scale power generation. Currently, the measured efficiency of STEGs is very low (less than 1%). This low efficiency is presumably caused by excessive heat loss by the absorber plate to the ambient, resulting in a low temperature gradient across the thermoelectric device. In this research, in an effort to understand the mechanisms of heat loss, a detailed computational study of a STEG was performed to understand the effects of various operating conditions on the efficiency of the device. A coupled thermal-electric three-dimensional simulations was performed under operating conditions similar to a recently conducted experimental study. The results obtained in this study showed that heat loss by natural convection is the dominant cause of low temperature gradients. The numerical study predicted an efficiency of 0.0884%, which was 47 times less than the efficiency without the effects of natural convection. The results of this study were validated against experimental results for operations in vacuum and operations in atmospheric conditions respectively.