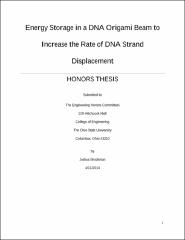 DNA origami, the programmed self-assembly of DNA into precisely designed structures, has the potential to create nanoscale devices with diverse functions including controlled drug delivery and molecular computing. A major current direction of DNA origami is integrating dynamics, largely accomplished through DNA strand displacement, the controlled dislodgment of DNA strands by other strands. However, DNA strand displacement is a slow process driven by random thermal fluctuations and therefore occurs on the timescale of tens of minutes or hours. The goal of this work is two-fold: 1) to design a DNA origami nanostructure that stores energy by mechanical deformation (much like a compressed spring), and 2) to use the energy stored in the structure to speed the process of DNA strand displacement. A spring-like nanostructure was designed based on a 7-helix bundle of DNA that stores mechanical energy through bending deformation much like a leaf spring. The device is bent by connecting the ends with single-stranded DNA (ssDNA). The degree of bending deformation, and hence the mechanical energy stored is controllable by the length of the ssDNA connection. The stored energy can then be used to accelerate displacement of the fluorescently-labeled DNA strand holding the beam into the bent conformation. Strand displacement reactions were allowed to run for several time points up to 40 minutes. Strand displacement was quantified via fluorescence imaging of the Alexa 555-labeled strand and the fluorescence data was analyzed to assess the speed of strand displacement. Fluorescence data indicates a twenty fold decrease in the time constant for the mechanically deformed bundle compared to an unstressed control, indicating the stored mechanical energy expedited DNA strand displacement. Ultimately, these results may provide a means to speed molecular computing and facilitate targeted drug delivery.