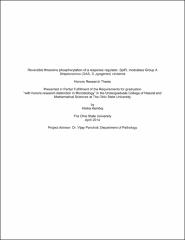 GAS bacterium is a successful human pathogen that causes a variety of diseases of the skin and pharynx and results in about 500,000 deaths worldwide. The pathogenesis of GAS diseases is highly complex. GAS virulence is regulated by several two-component regulatory systems (TCS) constituted by a response regulator (RR) and its cognate histidine kinase (HK). HK autophosphorylates on its His residue and transfers the phosphate to the conserved Aspresidue of RR, which acts as a transcription factor and regulates the expression of specific genes. SptR/S (Spy874/875) is an important TCS that regulates the expression of many carbohydrate-metabolism and transport (CMT)-related genes. GAS mutants lacking SptR display down-regulated CMT-related genes and are avirulent. Previously, our lab discovered that similar phenotypic characteristics were also observed in GAS mutants when the gene encoding for ser/thr kinase (STK) was deleted. We therefore hypothesize that STK phosphorylates SptR and its phosphorylated form regulates the expression of CMT-related genes. STK phosphorylates threonine residues. Whether Thr-phosphorylation of SptR plays any role in the regulation of gene expression is not known. In in vitro phosphorylation assays, we found that the purified SptR serves as a substrate for STK and ser/thr phosphatase (STP)- mediated reversible phosphorylation. To confirm this finding in vivo and appreciate its physiological significance, we immunoprecipitated (ip) SptR from the whole cell lysate derived from the wild-type GAS, and previously characterized GAS mutants M1ΔSTK and M1ΔSTP using SptR specific antibodies. We confirmed isolation of the 27kDa ip-protein to be SptR by anti-SptR antibody and its threonine phosphorylation status by Anti-ThrP antibody by Western blot analysis. Our results showed decreased and increased anti-ThrP-specific binding with ipSptR from GAS mutants M1ΔSTK and M1ΔSTP, respectively, confirming that SptR indeed serves as a substrate for the STK/STP-mediated reversible Thr-phosphorylation. We thus demonstrate a novel virulence-related gene regulatory mechanism in GAS.