What's Wrong with Beautiful?: An Exploration of Gender Bias in Related Programs 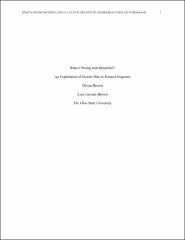 In recent years, the way boys and girls are socialized has become an increasingly popular topic of research. There is evidence that the ways in which children are socialized differently based on their gender can have adverse effects on both boys and girls. Two primary forms of sexist behavior and beliefs have been clearly identified and validated in the empirical research literature. Benevolent sexism is defined as statements, actions, or behaviors that seem positive but implicitly communicate that women should not stray from “traditional” gender roles, which are often perceived as inferior to men’s roles. Hostile sexism is a more overt form of sexism and is often recognized by observers and targets as unacceptable. Sexist beliefs and behaviors, including the words used to communicate with boys and girls, shape our culture and have effects on the self-esteem and perceived self-worth of young people and are worthy topics of study. In this study, we examined the differences between two manuals for the male and female versions of a program whose goal is to mold adolescents into strong leaders. Analyses were both qualitative and quantitative, and focused on assessing the differences between the materials provided to the participants prior to attending these programs. Quantitative analysis revealed that the boys’ program was higher in achievement-oriented words and independence-oriented words. Qualitative analysis also revealed differences in programming choices, availability of program-monogramed clothing, and rules regarding interaction with the other sex.