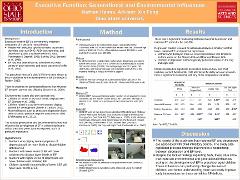 A link between the executive function (EF) of children and their mothers is a topic of psychology seldom explored, but could be of paramount importance. Limited empirical evidence suggests a connection in EF between parents and offspring. Familial factors, such as SES and maternal stress, have also been linked with the development of EF. Since forms of psychopathology involve deficits in EF, recognizing a predictive relationship between mother-child EF could lead to early identification of psychological conditions in their children. The current study explores how maternal EF and familial environment affects the development of child EF. Participants included 90 mother-child dyads (aged 3-3.5 years). Mothers’ executive function was assessed using the Wisconsin Card Sorting Test. Two aspects of child executive function, attention shifting and inhibitory control, were assessed in laboratory settings. Children’s attention shifting was tested using the Dimensional Change Card Sort Task and inhibitory control using the Bear and Dragon Task, Day and Night task, and the Shape Task. Mothers’ depressive symptoms were assessed using the Beck Depression Inventory. Mothers also reported family income, used as a proxy of family SES. Child age and gender were also included as covariates. Mothers’ EF was negatively associated with children’s inhibitory control in the Shape Task (β = -.24, p = .02) and the Bear and Dragon Task (β = -.31, p = .01). Additionally, family income (β = .24, p = .02) and child age (β = .39, p < .001) were associated with child inhibitory control in the Shape task, and maternal depressive symptoms were associated with child inhibitory control in the Day/Night task (β = -.29, p = .02). These data suggest that children from low-income families, mothers who are depressed, or mothers with deficits in EF may be at risk for problems in the development of EF