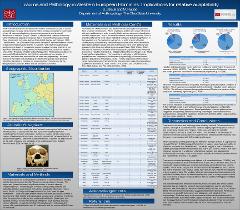 Multiple hominin species coexisted in Western Europe during the Pleistocene. Recent studies indicate that archaic Homo sapiens (i.e. H. heidelbergensis and H. antecessor) and Homo neanderthalensis possessed advanced cognitive abilities and adaptive strategies which were previously believed to be limited to anatomically modern Homo sapiens (AMHS). This information opens the possibility that the disappearance of archaic H. sapiens and Neanderthals was unrelated to an inability to compete with AMHS. If AMHS exhibited superior immune and behavioral adaptations that allowed them to better adjust to the environment already occupied by other hominins, then it is to be expected that their remains would exhibit fewer incidences of trauma and dental-skeletal pathological conditions than the remains of archaic hominins. To test this hypothesis, we present a comprehensive literature review of trauma and pathology observed among the Pleistocene fossils of archaic H. sapiens, Neanderthals, and AMHS at 32 Western European sites. Fisher’s exact test was used to analyze the differences among species. Considering skeletal trauma, no statistically significant difference among species has been shown. Although Neanderthals exhibited slightly higher frequencies of dental pathologies, no statistically significant difference has been shown. Archaic H. sapiens exhibited higher frequencies of infectious and congenital disease than Neanderthals, but not higher than AMHS. Despite inter-species differences, all Pleistocene hominins exhibited patterns of trauma and pathology that are within the range observed among later hunter-gatherers. This evidence supports the idea that archaic hominins were well adapted to their environment, and suggests that maladaptation was not a factor in their disappearance.