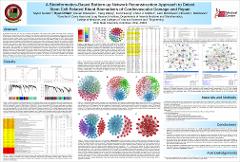 In peripheral blood there are very rare circulating stem/progenitor cells (CSPCs) with primitive characters and the capacity to differentiate into cardiovascular and other lineages. These cells are promising biomarkers of the organism’s resilience and of its ability to repair injuries. However, because of its complexity, the system of CSPCs has not yet been described by traditional methods in a coherent and simple enough manner to be clinically useful. In response to this limitation, we proposed the CSPC system could be directly assessed by gene expression analysis of peripheral blood mononuclear cells (PBMCs). Initially, 45 genes representing the most used markers of primitivity and differentiation were tested. Among these, 15 genes were organized as a module of the blood transcriptional network which inversely depended on age, blood pressure, and vascular stiffness of donors, as expected from CSPCs. To identify more members of this module, we analyzed 503 Affymetrix microarrays from public databases hybridized with RNA of normal human PBMCs from children (where the primitive genes were better expressed), adults, and burn victims (a response to an injury condition that is preferable to actual cardiovascular patients because of the lack of other risk factors which complicate the interpretation). Normalized data was analyzed by the bioinformatics co-variation method known as “guilt-by-association”. This approach identified 107 potential candidates from data collected from microarrays on healthy children, many having known roles associated with stemness, differentiation, angiogenesis, and/or cardiovascular diseases or repair. A larger study on adults was conducted, as well as studies involving burn injury (that induces massive mobilization of CSPCs) and pregnant women suffering from preeclampsia (a condition due to deficiencies in CSPCs), for comparison. In conclusion, we show how to expand a new, collective, systemic biomarker for the elusive CSPCs that could be used to track their response to injury and to identify patients at risk for developing, or already experiencing, cardiovascular diseases.