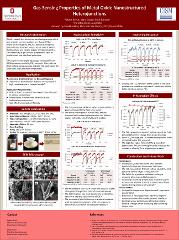 Titanium dioxide (TiO2) has demonstrated great potential for resistive-type gas sensors used to detect hydrocarbons and volatile organic compounds (VOC). Two parameters which affect the sensitivity of gas sensors is the surface area of the sensing material and interfacial potentials. This experiment is exploring the VOC selectivity and gas-sensing ability of TiO2 aerogel, the highest surface area TiO2 – based material, and metal oxide powders (MOX) containing single crystalline TiO2 nanorods. Nanorods are high surface area structures which alter the potential at surface interfaces. The nanorod structures are hydrothermally grown directly onto the powders with the use of a microwave synthesis system. These hybrid powders are then used to fabricate sensors which are tested in ethanol and acetone saturated air. Thus far, commercial grade TiO2, SnO2, NiO, and CoO powders and TiO2 aerogel have been used for sensor fabrication. Initial results indicate that the response of aerogel-based sensors is highly dependent upon the quality of the aerogel. Preliminary tests have also shown that the presence of nanorods appreciably increases the response of the sensors to ethanol and acetone saturated air. The SnO2 hybrid (containing nanorods) and CoO hybrid sensors show promise for be selective towards ethanol. Selectivity towards ethanol or acetone would allow the sensor to be used as a tool for preemptive diagnoses of diseases, such as diabetes. It has been found that patients with certain diseases possess elevated concentrations of specific VOC’s in their breath. There has only been limited success in developing a sensor which is sensitive to either acetone or ethanol, two of the main VOC’s used for diagnosis. The relationship between a sensor’s response, selectivity, and surface interface composition is being analyzed. Future work includes analyzing the relationship between temperature and response and fabricating sensors made of mixed MOX powders, instead of hydrothermal compositing.

The Ohio State University, Department of Materials Science and Engineering