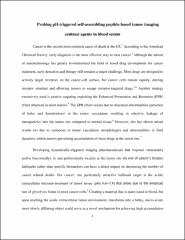 Early detection and imaging of cancer is challenging because most of the detection methods are based on specific biomarkers that are heterogeneously expressed on cancer cells leading to missed detection when the receptor is or becomes absent. Developing targeted imaging pharmaceuticals that localize via one of cancer’s broad hallmarks rather than a specific biomarker can have a direct impact on decreasing the number of cancer related deaths. One particularly attractive hallmark target is the acidic extracellular microenvironment of tumor tissue (pHe 6.6−7.4) that arises due to the enhanced rate of glycolysis found in most cancer cells. Creating a material that is nano-sized in blood, but upon reaching the acidic extracellular tumor environment, transforms into a bulky, micro-sized, more slowly diffusing object could serve as a novel mechanism for achieving high accumulation of imaging, drug delivery, or radiotherapeutic agents at the tumor site compared to the bloodstream. Especially for tumors, the heterogeneous matrix and high interstitial fluid pressure should govern blood-tumor diffusion of nano- and micro-particles dependent on their size. Here, we have designed and synthesized self-assembling peptide amphiphile (PA) molecules that transform from isolated molecules or spherical micelles into nanofibers (several microns in length) when the pH is slightly reduced from 7.4 to 6.6, in isotonic salt solutions that simulate the acidic extracellular microenvironment (pHe) of malignant tumor tissue. Our PA molecules consist of four main segments: a hydrophobic tail, a β-sheet-forming peptide sequence, a charged amino acid sequence and a DO3A-Gd Magnetic Resonance imaging (MRI) moiety. The PAs were synthesized via the solid phase technique using Fmoc chemistry, purified by Reverse-phase High Performance Liquid Chromatography (HPLC) and characterized by Mass Spectrometry, analytical HPLC and peptide content analyses. Circular Dichroism spectroscopy, Critical Micellar Concentration measurements and Transmission Electron Microscopy were used to characterize the transition and map a concentration-pH phase diagram. MRI measurements were done to calculate relaxivity values of water protons in presence of the PA and compare the same with a standard control. Finally, Fluorescence Anisotropy (FA) was used to probe self assembly in blood serum. After extensive structure optimization, the particular sequence/molecule Palmitoyl-IAAAEEEEK(DO3A-Gd) was found to transition at pH values closest to our desired physiological conditions. Relaxivity values of water protons in the presence of the PA at pH of 4 (nanofibers) and 10 (nanospheres), were found to be 8.3 and 6.6 mM−1 s−1, respectively. These values were higher than those measured for a Magnevist control standard (4.5 mM−1 s−1) as predicted. Blood serum was found to significantly facilitate formation of the larger fibers as indicated via pH dependent FA measurements. The transition was found to be rapid and reversible in both buffer and serum, indicating the system is in thermodynamic equilibrium.