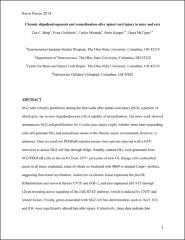 NG2 cells robustly proliferate during the first week after spinal cord injury (SCI), a portion of which give rise to new oligodendrocytes (OLs) capable of remyelination. Our prior work showed spontaneous NG2 cell proliferation for 4 weeks post-injury (wpi); whether these later responding cells still generate OLs and remyelinate axons in the chronic injury environment, however, is unknown. Here we used two PDGFαR-reporter mouse lines and rats injected with a GFP-retrovirus to assess NG2 cell fate through 80dpi. Notably, mature OLs were generated from NG2/PDGFαR cells as late as 8-12wpi. GFP+ processes of new OL lineage cells ensheathed axons at all times examined, some of which co-localized with MBP or abutted Caspr+ profiles, suggesting functional myelination. Astrocytes in chronic tissue expressed the pro-OL differentiation and survival factors CNTF and FGF-2, and also expressed pSTAT3 through 12wpi revealing active signaling of the JAK/STAT pathway, which is induced by CNTF and related factors. Finally, genes associated with NG2 cell fate determination, such as Hes5, ID2, and ID4, were significantly altered late after injury. Collectively, these data indicate that endogenous repair processes such as oligodendrogenesis, axon ensheathment and remyelination continue chronically after SCI, revealing that the injured spinal cord remains in a very dynamic state for 2-3 months post-injury. This previously unappreciated spontaneous reparative process may potentially be leveraged therapeutically to further enhance repair, and should be a consideration when testing agents that may inadvertently disrupt it.