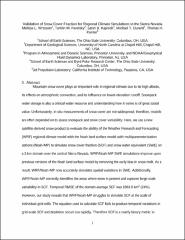 Mountain snow cover plays an important role in regional climate due to its high albedo, its effects on atmospheric convection, and its influence on lower-elevation runoff. Snowpack water storage is also a critical water resource and understanding how it varies is of great social value. Unfortunately, in situ measurements of snow cover are not widespread; therefore, models are often depended on to assess snowpack and snow cover variability. Here, we use a new satellite-derived snow product to evaluate the ability of the Weather Research and Forecasting (WRF) regional climate model with the Noah land surface model with multiparameterization options (Noah-MP) to simulate snow cover fraction (SCF) and snow water equivalent (SWE) on a 3 km domain over the central Sierra Nevada. WRF/Noah-MP SWE simulations improve upon previous versions of the Noah land surface model by removing the early bias in snow melt. As a result, WRF/Noah-MP now accurately simulates spatial variations in SWE. Additionally, WRF/Noah-MP correctly identifies the areas where snow is present and captures large-scale variability in SCF. Temporal RMSE of the domain-average SCF was 1863.9 km2 (24%). However, our study reveals that WRF/Noah-MP struggles to simulate SCF at the scale of individual grid cells. The equation used to calculate SCF fails to produce temporal variations in grid-scale SCF and depletion occurs too rapidly. Therefore SCF is a nearly binary metric in 2 mountain environments. Sensitivity tests of the equation may improve simulation of SCF during accumulation or melt but does not remove the bias for the entire snow season. Though WRF/Noah-MP accurately simulates the presence or absence of snow, high-resolution, reliable SCF measurements may only be attainable if snow depletion equations are designed specifically for complex topographical areas.