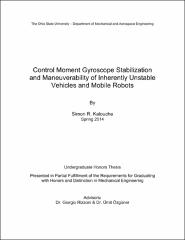 The control problem of stabilizing an inherently unstable body, such as the inverted pendulum, is a classic control theory problem. Traditionally, the solution to this problem has been approached through methods of dynamic stabilization where the inverted pendulum is placed on a wheeled cart that can travel with one translational degree of freedom. This cart essentially accelerates the pivot of the inverted pendulum to accelerate the pendulum to induce a rotation that counteracts the imbalance in the system. A different approach to stabilizing a static or stationary inverted pendulum makes use of the intriguing phenomena known as gyroscopic precession. Precession and the physics of gyros are governed by conservation of angular momentum. By utilizing this technology in a novel way, groundbreaking progress can be made in the field of autonomous stability of inherently unstable mobile robots and vehicles (e.g. two wheeled vehicles). Gyroscopic effects can be found today in simple devices such as a spinning top or a bicycle’s wheel in motion. Gyros are also found in very complex mechanisms such as those used for satellite attitude and large ship anti-roll systems. Recent gyro studies have shown tremendous promise for providing unparalleled capabilities in stabilization and maneuverability for both on and off-road vehicle applications.