Hip Hop is not Dead: The Emergence of Mara Salvatrucha Rap as a form of MS-13 Expressive Culture 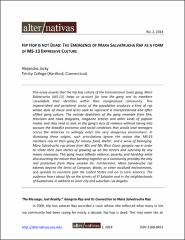 This essay asserts that the hip hop culture of the transnational street gang, Mara Salvatrucha (MS-13), helps to account for how the gang and its members consolidate their identities within their marginalized community. This impoverished and peripheral sector of the population produces a kind of rap whose style of music and lyrics seek to represent a misrepresented and often vilified gang culture. The outside depictions of the gang emanate from film, television and news programs, magazine articles and other kinds of popular media, and they tend to look at the gang’s acts of violence without taking into account the dreadful economic and social conditions that would lead teenagers across the Americas to willingly enter this very dangerous environment. In dismissing these origins, such articulations ignore the notion that MS-13 members rely on their gang for money, food, shelter, and a sense of belonging. Mara Salvatrucha rap draws from 80s and 90s West Coast gangsta rap in order to relate their own stories of growing up on the streets and surviving by any means necessary. This gang music reflects violence, poverty, and hardship while also asserting the notion that banding together as a community provides the only real protection from these societal ills. Furthermore, Mara Salvatrucha rap extends beyond the limits of Compton, Watts, or other localized environments, and spreads its narrative past the United States and on to Latin America. The audience hears about life on the streets of El Salvador and in the neighborhoods of Guatemala, in addition to inner city and suburban Los Angeles.