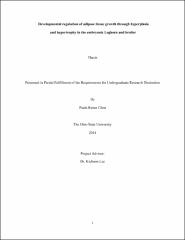 The United States is a world leader in poultry production, which drives producers to strive for better performance and muscle growth each year. Reducing accretion of adipose tissue is another important factor for poultry producers because this allows more nutrients to be directed towards muscle growth, but the impact of embryonic adipose growth on post-hatch development has not been fully understood. The purpose of this study was to investigate total DNA mass, morphological characteristics, differentiation markers, and triglyceride (TG) breakdown factors of embryonic adipose tissue, and their relation to hyperplastic and hypertrophic growth within layers (Leghorn) and meat-type (broiler) chickens. After 12 d incubation (E12), broiler embryonic weight was significantly higher than Leghorn, and this trend continued throughout incubation and post-hatch (P<0.05). Neck and leg fat pad weights between the two breeds did not differ at each time point. Between E12 and E14, a remarkable increase in total DNA mass was observed in both Leghorn and broiler (P<0.05), indicating a high potential for hyperplastic growth during this time. Histological analysis revealed clusters of preadipocytes at E12; however, the majority of these cells differentiated at E14 and continued to expand until time of hatch. Adipocyte sizes between both breeds did not generally differ even though broilers are known to have larger adipocytes post-hatch. Fatty acid-binding protein 4 expression levels in Leghorn and broiler continued to rise with each time point, which was paralleled with the expansion of mature adipocytes. Adipose triglyceride lipase was highly expressed at E20 and D0 to mobilize TG degradation for energy during hatching. Thus, embryonic chicken adipose tissues were found to develop by hyperplastic mechanisms followed by hypertrophy. At embryonic stages and early post-hatch, layer and meat-type chicken adipose growth does not differ, which suggests breed differences occur post-hatch.