Black and Tan Realities: Chicanos in the Borderlands of the Hip-Hop Nation 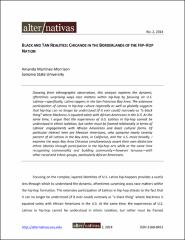 Drawing from ethnographic observation, this analysis explores the dynamic, oftentimes surprising ways race matters within hip-­‐hop by focusing on U.S. Latinos—specifically, Latino rappers in the San Francisco Bay Area. The extensive participation of Latinos in hip-­‐hop culture regionally as well as globally suggests that hip-­‐hop can no longer be understood (if it ever could) narrowly as "a black thing" where blackness is equated solely with African Americans in the U.S. At the same time, I argue that the experiences of U.S. Latinos in hip-­‐hop cannot be understood in ethnic isolation, but rather must be framed relationally in terms of Latinos' engagements with African Americans and black cultural forms. Of particular interest here are Mexican Americans, who comprise nearly seventy percent of all Latinos in the Bay Area, in California, and the U.S. more broadly. I examine the ways Bay Area Chicanos simultaneously assert their own distinctive ethnic identity through participation in the hip-­‐hop arts while at the same time recognizing commonality and building community—however tenuous—with other racial and ethnic groups, particularly African Americans.