Haiti Photographs (Paul and Erika Bourguignon Collection)
JavaScript is disabled for your browser. Some features of this site may not work without it. 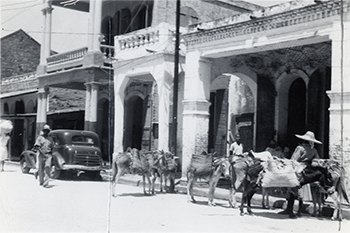 "This collection of photographs and related materials was prepared under a grant from the Wenner-Gren Foundation for Anthropological Research to be deposited in the Rare Book and Manuscript Collection Ohio State University Libraries. The work was carried out by Erika Bourguignon and Jane Hoffelt. The photographs in this collection were taken by Paul-Henri Bourguignon in Haiti during the period May 1947 to July 1948. A few additional photographs were taken by Erika Bourguignon between August 1947 and July 1948 in the course of her ethnographic field research.

Haiti, located on the Western portion of the Island of Hispaniola, which it shares with the Dominican Republic, is strategically located on the Windward Passage, providing maritime access from the Atlantic to the Gulf of Mexico. In 1948, according to the U. S. Department of Commerce, Haiti, with a surface area of approximately 10,700 square miles, was estimated to have a population of 3,000,000. The capital city of Port-au-Prince had an estimated population of 125,000.

The collection concentrates on three ecological areas where research was conducted: the city of Port-au-Prince and environs, the sugar plantations of the plain of Léogane, and the mountainous area of Furcy, where corn and coffee are the principal crops. These three sites differ with regard to topography, climate, crops, economic activities, social organization, religion, architecture and more. In addition, photographs are included of various sites visited during a road trip from Port-au-Prince: first west to Miragoâne then south over the watershed to Les Cayes on the south coast (see map). The photographs are supplemented by a series of commentaries, four dealing with geographic locations, the others with topics drawing from information from several sites. Some later developments are noted parenthetically." -- Erika Bourguignon, Columbus, Ohio, October 2006