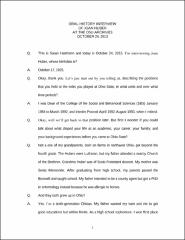 After moving from northwest Ohio, where she was born, to State College, Pennsylvania, Joan Huber earned her bachelor’s degree from Pennsylvania State University in 1945. She then taught graduate classes in German for two years there. She eventually moved to Grand Haven, Michigan, where she first pursued a master's degree, which she received from Western Michigan University, then a Ph.D, from Michigan State University. She later taught at Notre Dame, where she became a more active feminist, then she went to the University of Illinois, where she served as the first director of Women’s Studies. In 1984, she came to Ohio State to serve as Dean of the College of Social and Behavioral Sciences, until 1992 when she became interim Provost for a year before retiring. Huber describes her experiences as dean and provost, as well as various issues of gender, race and religion in the interview.