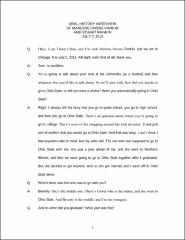 This interview details the experiences of Marlene Owens Rankin and Stuart Rankin while they were undergraduate students at The Ohio State University. Marlene Owens Rankin recounts her time at Ohio State from 1957-1961, including her Homecoming Queen campaign and victory during the 1960-61 school year. The interview also details the experiences of Stuart Rankin at the University from 1956-1961, including working multiple jobs to pay for school. During the 1957 school year Marlene and Stuart met, and would later marry. After graduating, both Marlene and Stuart continued a close relationship with The Ohio State University through various volunteer roles for the alumni association and the President’s Advisory Committee.