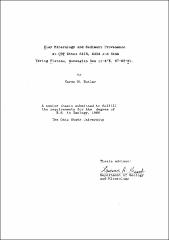 Using X-ray diffraction, twelve sediment samples from the Vøring Plateau, Norwegian Sea (1-4° E, 67-68° N) have been analyzed for their clay mineral constituents and their relative clay mineral abundances. The results of the analysis indicate that the relative clay abundances average 10.3% smectite, 60.7% illite and 29.1% kaolinite. The presence of kaolinite is noteworthy because kaolinite is generally considered to be a low-latitude clay, and these samples were obtained from high latitudes. From a synthesis of literature dealing with the presence of kaolinite in high latitudes, a hypothesis has been formed in order to explain the presence of kaolinite in these samples. That hypothesis is as follows: Kaolinite formed in Norway during the Devonian and Carboniferous. Paleolatitudes for Norway at this time were equatorial, so the climate was favorable for the development of this mineral. The kaolinite regolith was subsequently buried, but was re-exposed in the late Triassic, with the uplift of the present Norwegian shelf. The kaolinite-bearing sediment was later eroded, reworked, and redeposited as younger sediments. During the Pleistocene, the kaolinite-bearing rocks were removed from the land by glacial erosion and deposited seaward of the Norwegian coast. Norwegian terrigenous sediments, including kaolinite, were transported to the continental shelf and greater depths of water by ice, icebergs, surface currents, and suspension currents. The latter were especially effective on the slopes of the Vøring Plateau, where the kaolinite was later found at ODP Sites 642B, 643A and 644A.