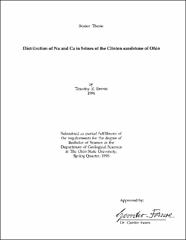 The Na and Ca concentrations of 45 brine samples from the Clinton sandstones in eastern Ohio are the result of mixing of two brine components in the subsurface. These concentrations were subsequently altered by dilution with groundwater or meteoric water. The two brine types are: a Na-rich brine and a Ca-rich brine. The abundance of the Na-rich brine slightly decreases with depth in the Clinton, while the abundance of the Ca-rich brine slightly increases with depth, but both are virtually constant. Four Na-rich, low-Ca anomalies exist in eastern Ohio. Three of the four anomalies correlate with known basement faults in eastern Ohio. Therefore, this study supports the conclusion that mixing and dilution account for the observed chemical compositions of brines in the Clinton sandstones of eastern Ohio.