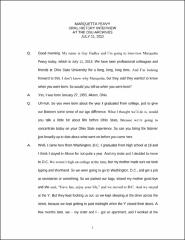 Marquetta Peavy discusses her career at the Ohio State University Medical Center where she began working as a unit clerk to pay for classes. After graduating from high school in Akron, Peavy initially moved to work in Washington, D.C., Two years later, she moved to Columbus and got a job in an insurance company. She decided to get her degree and signed up for night classes at Ohio State. In order to finish her degree, she had to start taking day classes, so Peavy got a job working the evening shift as a unit clerk at the medical center in order to pay the bills. After she graduated in 1976, she had her first child so she decided to stay at the medical center, but she looked for better opportunities. She was initially hired as a supervisor, then promoted to coordinator. She then became Director of Clerical Services. Eventually, Peavy switched to human resources, first as a nurse recruiter, then as an ombudsman. She became involved in employee relations, then in training. She spent the last 15 years of her career at Ohio State as Associate Director of the Department of Educational Development and Resources at the medical center. Throughout her interview, she discusses the roles that race and gender played in the development of her professional life and in employee relations in general at OSU.