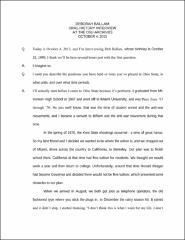 Deborah Ballam describes her career and activist role at the university after relating her journey through OSU first as an undergraduate, then as a master’s-degree student and as a student in the College of Law. Her academic career began in 1985 when she became an assistant professor in the College of Business. She spent most of her career in the College of Business until 2003 when she was named the Director of The Women’s Place. Throughout her student and professional career, Ballam took on an activist role on issues related to women and members of the Gay Lesbian Bisexual and Transgender community. In her work to eliminate discrimination against women faculty and staff, Ballam first prepared, with two other women faculty, a “chilly climate” report for the College of Business. This led to a cross-campus series of lunches on the subject, which led to the creation of the Women’s Grassroots Network and eventually, The Women’s Place. Ballam also discusses her philosophy on effecting change as well as the motivations she has felt to tackle various issues.