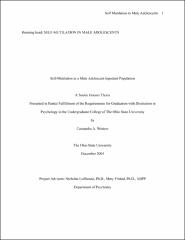 Although self-mutilation (SM) among adolescents has recently received increased scientific and public attention, most of this research has been conducted on females and community populations. The current study explored SM in a group of male adolescent psychiatric inpatients by comparing 42 13-to-18 year-old males hospitalized for SM to 42 clinical controls who were not hospitalized for SM. Using archival assessment data, annual rates of SM, age and ethnic characteristics and associations with family status, psychosocial functioning, diagnoses and stressful life events were examined. Results indicate the rates of male SM increased between 2000 and 2005. Most teens engaging in SM were 15-to-16 years old and Caucasian and were given a variety of psychiatric diagnoses. Compared to clinical controls, males endorsing SM reported less interpersonal conflict but fewer friends; were less likely to be diagnosed with conduct disorder but more likely to have major-depressive disorder. Across both groups, most adolescents did not live with their two-biological parents and experienced similar number of stressful life events 12-months prior to hospitalization. Findings, limitations and implications of the study are discussed.