Rural Masculinities and the Internalisation of Violence in Agricultural Communities 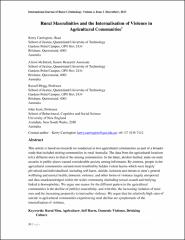 This article is based on research we conducted in two agricultural communities as part of a broader study that included mining communities in rural Australia. The data from the agricultural locations tell a different story to that of the mining communities. In the latter, alcohol-fuelled, male-on-male assaults in public places caused considerable anxiety among informants. By contrast, people in the agricultural communities seemed more troubled by hidden violent harms which were largely privatised and individualised, including self-harm, suicide, isolation and threats to men’s general wellbeing and mental health; domestic violence; and other forms of violence largely unreported and thus unacknowledged within the wider community (including sexual assault and bullying linked to homophobia). We argue one reason for the different pattern in the agricultural communities is the decline of pub(lic) masculinity, and with this, the increasing isolation of rural men and the increasing propensity to internalise violence. We argue that the relatively high rates of suicide in agricultural communities experiencing rural decline are symptomatic of the internalisation of violence.