Women and Crime in the Rural-Urban Fringe 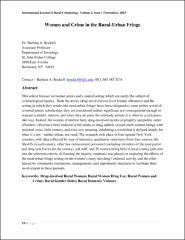 This article focuses on human actors and a spatial setting which are rarely the subject of criminological inquiry. Both the actors (drug-involved low-level female offenders) and the setting in which they reside (the rural-urban fringe) have been relegated to some nether world of criminal justice scholarship: they are considered neither significant nor consequential enough to warrant scientific interest, and when they do enter the scholarly picture it is often in a caricature-like way. Indeed, the women of interest here, drug-involved recidivist property and public order offenders, often have been reduced in the media to drug-addled, crystal-meth scarred beings with minimal voice, little context, and even less meaning, inhabiting a world that is defined simply for what it is not - neither urban, nor rural. The research took place in four upstate New York counties, with data collected by way of intensive, qualitative interviews from four sources: the Sheriffs in each county, other law enforcement personnel (including members of the road patrol and drug task forces for the county), jail staff, and 20 women being held in local county jails who met the selection criteria. In framing the inquiry, emphasis was placed on exploring the effects of the rural-urban fringe setting on the women’s entry into drug / criminal activity and the roles played by community institutions, arrangements, and opportunity structures to facilitate their involvement in these pursuits.