Verbal Fluency in Dementia: Effects of Cognition, Education, and Gender 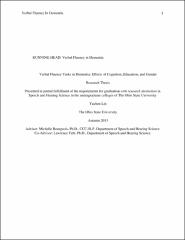 Dementia is a progressive condition characterized by a loss of cognitive abilities such as memory, judgment, behavior, and language. Difficulties with word finding and expression are particularly well-documented language deficits. Verbal fluency tasks, which document speeded access to lexical and semantic memory stores, have often been utilized to aid in dementia diagnosis. To explore the value of verbal fluency as a diagnostic measure, the current study investigated differences in verbal fluency performance of dementia participants across two semantic tasks (animal and food naming) and two phonemic tasks (words beginning with the letter S or F). The effects of cognitive status, education, and gender on verbal fluency performance were also investigated. Forty-one participants were administered the four fluency tasks and their responses were audio recorded and coded. Results revealed significantly better performance on semantic tasks overall; cognitive impairment level and education were found to be related to verbal fluency performance. No gender effects were found. Results suggest that verbal fluency is multifactorial in nature and that semantic verbal fluency tasks, especially the food item task, may be more helpful as a dementia diagnostic tool.