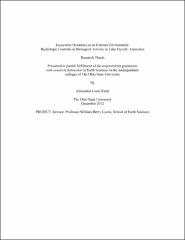 The McMurdo Dry Valleys of Antarctica constitute a large and significantly ice free area of Antarctica at 78 degrees south latitude. The area is a polar desert but contains several lakes fed by glacial melt water from four to twelve weeks of the year. Over the past twenty years data have been gathered on the lakes located in Taylor Valley, Antarctica as part of the McMurdo Dry Valley Long-Term Ecological Research program (MCM-LTER). All data are publically available at www.mcmlter.org. This thesis is part of a larger investigation that seeks to understand the impact of climate on the biological processes in all the ecosystems within Taylor Valley, including the lakes. These lakes are stratified, closed-basin systems and are perennially covered in ice. Each lake contains a variety of planktonic and benthic organisms that live on the edge of survival in this extreme environment. The biological processes in these lakes are sensitive to small variations in climactic conditions. Subtle changes in these conditions can have a large impact on measures of planktonic production and planktonic biomass. Previous work has demonstrated that biological activity in the lakes is mostly driven by ice thickness because ice thickness greatly affects the input of photosynthetically active radiation (PAR). Stream water input of nutrients is also thought to be a factor in lake productivity. The work presented here focuses on Lake Fryxell, one of the three main lakes in Taylor Valley, which is fed by thirteen streams. In this thesis, a statistical approach was used to link the physical, chemical, and biological processes within the lake to the nutrient-bearing streams that flow into it. In this statistical approach stream flow data are compared to biological data to identify the association between stream flow and various biological parameters. Three conclusions were drawn from this analysis. I then attempt to explain each of these findings through citation of previous work and the generation of new hypotheses. Firstly, it was found that biomass parameters were more affected by input of stream water than were biological production parameters. Other studies have demonstrated that there are other factors such as photosynthetically active radiation and dissolved organic carbon that have a significant influence on production parameters. Secondly, bacterial plankton responded more quickly to input of stream water than did phytoplankton. I explain this difference by hypothesizing that the nutrients consumed by bacterial plankton move more quickly through the water column than the nutrients consumed by phytoplankton. Lastly, it was found that a direct relationship between biological parameters and the log of annual average instantaneous stream discharge was most effective at predicting biological activity. I explain this by hypothesizing that past a certain annual average instantaneous discharge, stream flow has less and less of an effect on lake ecology.