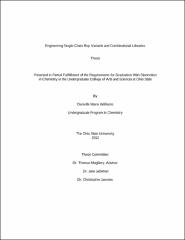 Understanding the basis of protein stability is one of the most profound current fundamental problems in biophysics. A single mutation can cause misfolding or prevent folding, leading to diseases such as cancer and cystic fibrosis. To explore the relationship between protein sequence and function, model proteins can be altered through rational design and characterized to study the effects of the changes. Rop is a small, homodimeric, four-helix bundle and is a well-characterized model protein due to its small size and simplicity. My project involves the engineering of a single-chain Rop that has similar activity and stability with respect to the wild type. Two variants of a single chain mutant with known X-ray crystal structure (PDB ID: 1yo7) were created by making point mutations to the loop sequences, and they differ by the deletion of an isoleucine in one loop. We characterized these proteins using CD, NMR, and crystallography, and we tested them for activity in a GFP-based screen. Both variants are alpha-helical and well-folded, and thermal and urea denaturations have indicated cooperative unfolding. Both variants are significantly more active than 1yo7, comparable to wild type. NMR data also suggest that the proteins are well-folded in solution. Analysis by gel filtration chromatography shows that the proteins exist as monomers in solution, and both variants were crystallized with PEG precipitant. Crystals of the variant without isoleucine diffracted well, and we are solving the structure by molecular replacement. We have also characterized twelve variants from a combinatorial library of Rop in which five solvent-exposed residues were randomized. This research provides insight into how sequence alters protein stability. Such data will eventually enable us to rationally design proteins as drugs and for other potentially useful applications in industry.