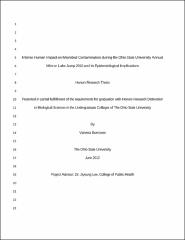 In order to assess the potential fecal contamination, and possible human health risk posed by an urban lake following a high human disturbance event on the Ohio State University campus, we examined human source contribution by measuring water quality and qPCR targeting multiple genetic markers (tetQ, huBac gyrB, and Ent 23S) indicative of the presence of fecal bacteria. During the night of November 23-24, 2010, hourly water samples were collected. Water quality, fecal indicator bacteria, and human-specific fecal bacteria were enumerated using standard methods. Amongst the parameters, tetQ (antibiotic-resistance gene, qPCR), human-specific bacteroides (qPCR), E.coli (culture method), and Enterococci spp. (culture method) increased throughout the night. This could be attributed to human-originated fecal contribution via bather’s shedding because the observed culturable Enterococci spp. results are comparable to past studies showing a correlation between bather densities and Enterococci counts. Among the water quality parameters measured, turbidity showed significant changes. Number of E. coli and Enterococci peaked around the time of the highest human numbers, but decreased sharply afterwards. This can be attributed to the increased turbulence and the disturbed sediments due to the large number of students present in the water. However, the sharp decrease indicates that these bacteria attached to the disturbed soil particles which settled after the majority of the people had left. Therefore, turbidity must be considered when determining the contribution of sediments to the overall bacterial load. By determining whether an association exists between bather densities, observed bacterial counts, and qPCR results, this could lead to the future development of using qPCR of fecal bacteria for routine water quality monitoring of recreational bodies of water.