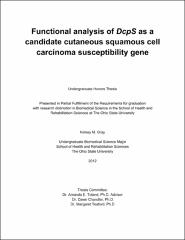 DCPS is a candidate cutaneous squamous cell carcinoma (SCC) susceptibility gene as determined by allelic imbalance mapping of paired SCC and genomic blood DNA samples. DCPS shows no protein expression in 23% of human SCCs on a tissue microarray, and reduced protein expression in another 30%. This is in contrast to strong staining for DCPS in 100% of normal tissue samples. DCPS, a decapping scavenger enzyme, influences the pool of available cap-binding proteins and, in turn, impacts aspects of mRNA metabolism like pre-mRNA splicing and decay. The hypothesis driving this research is that DCPS acts as a tumor suppressor. To test this hypothesis, functional effects of increasing and decreasing expression of DcpS in a mouse keratinocyte cell line have been studied. First intron splicing and exon skipping is enhanced in DcpS overexpression cell lines, while splicing of the second intron is not affected by DcpS expression. DcpS knockdown cell lines were found to have more stable mRNA compared to a control cell line. DcpS knockdown cell lines exhibit less growth than normal and overexpression cell lines. Cell migration is not affected by DcpS expression. DcpS knockdown cell lines exhibit more apoptosis than normal and overexpression cell lines. Finally, there is a greater percentage of cells in the S and G2-M phases of the cell cycle in DcpS knockdown cell lines compared to mock and overexpression cell lines. From these studies it appears that while DcpS may affect mRNA splicing and stability, decreased levels of DcpS do not result in a cancer phenotype. Rather, decreased levels of DcpS seem to lead to an anti-tumorigenic phenotype. Future directions may include examining the effect of UV radiation on these phenotypes and determining other proteins with which DcpS interacts.