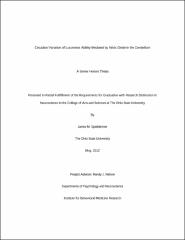 Previous research has revealed circadian differences in locomotor ability corresponding to improved performance during active period. Nitric oxide (NO) production by the enzyme neuronal nitric oxide synthase (nNOS) exhibits circadian variation in the cerebellum. Considering the distribution and circadian variation of nNOS in the cerebellum, I hypothesized that NO could mediate daily rhythms in motor learning. The present study used the compound 7-nitroindazole (7-NI) to selectively inhibit nNOS during only times of investigative interest to circumvent the possibility for developmental compensatory mechanisms in nNOS knock-out (nNOS-/-) mice which lack nNOS throughout life. Mice were given intraperitoneal injections of either vehicle or 7-NI twice daily (1h prior to when lights were illuminated and before lights were extinguished) under a 12:12 (light:dark) photoperiod. Following lights on/off on the tenth day of injections groups were trained on an accelerating rotorod (4-40rpm) and tested 12 h later recording latency to fall. Four groups were formed based on treatment and time of behavioral analysis: A vehicle and a 7-NI group were trained in the morning and tested at night, and a vehicle and 7-NI group were trained at night and tested in the morning. I hypothesized 7-NI treatment would result in impaired locomotor ability and learning regardless of time of day and that vehicle treated groups would display the endogenous rhythm of locomotor ability. At the onset of the resting period vehicle treated mice exhibited impaired locomotor ability in accordance with the endogenous circadian rhythm, whereas 7-NI treated individuals lacked circadian variation of locomotor ability. NO expression was implicated in the circadian variation of locomotor ability. Immunocytochemical labeling of L-citrulline, a reliable marker of nNOS activity, will quantify the influence of nitric oxide expression in the cerebellum on circadian differences in locomotor ability and learning.