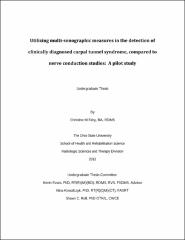 Carpal tunnel syndrome (CTS) has shown increasing incidence rates over the last few decades. This upward trend will likely continue, correlating with increases in contributing factors, including obesity, diabetes, increased age, and occupational strain. Carpal tunnel syndrome is generally diagnosed clinically but confirmed with nerve conduction studies (NCS). The use of NCS as the gold standard has been argued in the literature, largely based on false negative rates up to 34%. Additionally, the invasive and costly nature of NCS has prompted the exploration of alternative methods. Sonography has shown great promise, reporting comparable predictive values in current literature. Although sonography provides a cost-effective, well tolerated, non-invasive evaluation, clearly identified methods for diagnosing and categorizing the severity of CTS have not been established. The purpose of this pilot study was to determine if a blended approach using sonographic and clinical indicators could improve the predictive value and provide clinicians with a feasible alternative for diagnosing and categorizing the severity of CTS. A retrospective case-control study was conducted to identify the most sensitive variables and establish a severity classification method based on sonographic and clinical indicators. Symptomatic subjects and asymptomatic controls were compared, as were variables amongst NCS severity categories. Sonographic and clinical indicators associated with CTS included increased cross-sectional area (CSA), abnormal longitudinal appearance and restricted excursion of the median nerve, presence of classic and nocturnal symptoms, and positive provocative testing. Ultrasound severity categorization using a combination of these indicators matched 63% of NCS results, and 84% of asymptomatic controls were identified as normal using the scoring system. This pilot data is a useful step in isolating salient variables that could be further explored in replicated studies with increased recruitment. Confirmatory studies may provide clinicians with a holistic approach for the initial diagnosis and categorization of CTS.