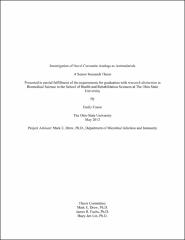 There are over two hundred million cases of malaria each year. Although there are effective treatments, drug resistant strains are emerging that make discovery of new antimalarials an important goal. We have developed a semi-automated assay platform to screen novel compounds for their ability to kill Plasmodium falciparum, the parasite that causes the most deadly form of human malaria. This assay was used to screen novel analogs of curcumin, a component of the spice turmeric, which is known to have antimalarial activity. Several of these analogs were found to inhibit parasite growth at low-micromolar to sub-micromolar concentrations. The compounds in this collection represent eight structural classes, and a structure-activity relationship analysis indicates a class-specific potency. Monocarbonyls had relatively high potency, while coumarins had very little activity against the parasite. The heteroaromatic and aromatic class of compounds are the most promising for future study because compounds in this class had very little activity against mammalian cell lines, indicating high selectivity for the parasite. Curcumin inhibits parasite growth at an IC50 of 6.06 μM while the most promising and selective compound in this screen, compound 47, is an aromatic compound with an IC50 of 0.512μM. We have developed an assay to investigate interactions between these compounds and current antimalarials in combination, and we hope to determine whether the promising compounds may be used effectively in combination with other existing antimalarials.