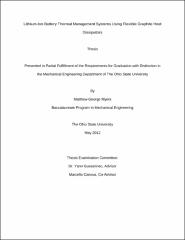 Lithium-Ion batteries are used in a wide variety of devices over a broad range of powers. All batteries generate heat due to the internal resistance of the battery and entropic effects which is roughly proportional to amount of power being drawn from the cells. This heat can cause many problems in the operation of the battery including shortening the lifetime of the cells, reducing their power output, electrical imbalance between the cells due to non-uniform heating within a pack, and even the possibility of fire and explosion in extreme cases. Thermal management of the cells then becomes an important study. As technology progresses, higher power demands are put onto the battery packs. In addition, cells are routinely packed together as tightly as possible to conserve space. This increasing power density demands that heat be shared evenly between individual cells and ultimately removed from the battery pack. This research investigates the application of flexible graphite material in managing the heat production of lithium ion battery packs. The pack chosen for this study is a 10 cell, 36 volt pack consistent with the type found in modern hand-held rechargeable power tools. Three packs were designed including a control and two packs with different heat spreader geometries. The packs were constructed and instrumented with voltage leads on the individual cells and thermocouples. The packs were then subjected to a series of high-current charge/discharge cycles. Deviations in the voltages of the cells and the temperatures at several points within each pack were monitored as the batteries were cycled. When a iii predetermined exit condition based on a maximum limit on voltage and temperature spread within a pack, the experiment was concluded. While there was not enough data as of yet to detect a significant slowdown in voltage imbalance increase, there did appear to be a reduction in the rate of increase in temperature imbalance by using the graphite heat spreaders that should lead to an improvement in endurance as the experiment progresses.