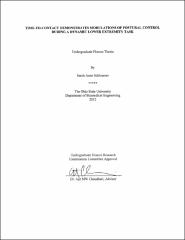 Postural control deficits are associated with increased risk of loss of balance and potential injury. To assess for balance deficits and increased injury risk, there is a need to evaluate postural control during dynamic activities. Analysis during dynamic activities could assess if an individual’s ability to control their posture is a fixed condition or if it is dependent on the demands of a task. Time to contact (TtC) detects instantaneous modifications in postural control during dynamic tasks by estimating the time for the center of pressure, given its instantaneous trajectory, to move outside the base of support. The purpose of this study was to evaluate changes in postural control during a dynamic lower extremity task using TtC analysis. 3D motion capture with a force plate was used to evaluate 47 athletes performing the Star Excursion Balance Test. TtC was calculated for 27 valid trials per stance leg. For each trial, the time from the toe leaving the force plate to the toe touching the floor at the maximum reach distance was divided into five epochs of equal duration. TtC was averaged over each epoch. Differences in TtC were evaluated with an unbalanced mixed effects ANOVA and post-hoc Tukey’s HSD comparisons. Epoch was a significant main effect (p<0.001), with significantly different TtC between all epochs (p=0.001). Increasing TtC in later epochs suggests a higher demand for postural control when the task becomes more challenging as the subject’s reaching foot extends further from the body. No significant differences in TtC were present for either stance leg or reach direction. Average normalized reach distances were compared to average TtC during Epoch 5 by direction using a Pearson’s correlation analysis. A very weak correlation was found in the anterior direction (ρ = -0.317, p = 0.032), suggesting individuals modulate their postural control based on the demands of a task. Future work is necessary to evaluate how TtC relates to other facets of postural control, such as flexibility and strength.