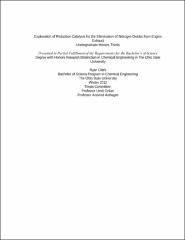 In recent years there has been a push for more efficient lean-burn engines that operate with higher air-to-fuel ratios. In order to support this demand, the need has arisen for an effective catalytic system to control the emissions of nitrogen oxides (NOx) from such engines. In this work, a study was performed on reduction catalysts prepared with 0.3% Pd by mass supported on sulfated zirconia (0.3% Pd/SZ) through a single-pot sol-gel process. The catalysts were prepared with varying alkoxide concentrations and Zr:SO4^2- ratios. Surface area and pore volume characterizations were performed on the samples and it was found that increasing the Zr:SO4^2- ratio decreased the surface area and pore volume of the catalysts. Catalyst activity testing was performed on the catalysts in a simulated exhaust stream and the catalyst prepared with the highest alkoxide concentration (1.3 M) and the highest Zr:SO4^2- (3:1) ratio was found to have the highest activity per surface area. This catalyst was found to be highly resistant to increases in gas hourly space velocity. Pd supported on sulfated ceria and zirconia mixtures were prepared through incipient wetness impregnation. The addition of 10% Co/Ceria in varying ratios to 0.3% Pd/SZ (1.3/3) was found to significantly increase NOx conversion and fully oxidize CO species. The optimum ratio of 0.3% Pd/SZ (1.3/3) to 10% Co/Ceria was found to be 8:1 by mass.