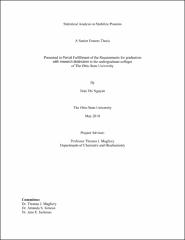 Consensus design uses statistical information to introduce stabilizing mutations by replacing a wild-type residue with the most common amino acid in a multiple sequence alignment. Consensus residues are found to be stabilizing about 60% of the time, which is much more than the ~1% stabilization from a random mutation. Despite great progress, a comprehensive model to predict protein stabilization is still undetermined. To confront this obstacle, we devised a statistical model using relative entropy (degree of conservation) as a filter to improve consensus design. This knowledge can be used to create an algorithm to improve protein structure, stability, and function. Relative entropy was used to identify mutations in triosephosphate isomerase (TIM) to increase the stability of proteins. TIM protein is an essential component of the ubiquitous glycolytic pathway and its prevalence makes it an excellent model protein for statistical design. TIM mutants at sites with varying relative entropies and secondary structures were engineered to test the hypothesis that more conserved mutations will be more stabilizing. Results from CD thermal melts indicate that highly conserved positions on protein surfaces with low correlations to other positions have the greatest stabilizing effect. To further investigate the mechanism of stabilization, urea melts are being performed to examine unfolding rates. In addition, compensatory mutations are being engineered in high relative entropy mutants with high correlations. Mutations may disrupt the normal interactions between correlated residues, affecting the folding and structure of the protein. This could provide insight into why a few of the high relative entropy mutations did not stabilize the protein as expected. The ability to stabilize proteins has innumerable industrial and therapeutic applications. The use of relative entropy as a statistical analysis can improve techniques for accurately increasing the stability of proteins while obtaining greater depth on the sequence-structure relationship. Advisor: Thomas Magliery