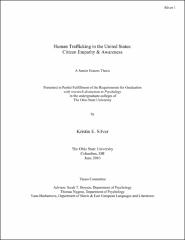 Trafficking in human beings, or modern slavery, provides billions of dollars in revenue for transnational criminal groups and results in suffering for millions of victims. This is an issue that has recently garnered national media attention, but there are only limited data on its scope and nature within the United States, and no known data are available on layperson knowledge of or attitudes towards trafficked people. The objective of this study was two-fold: to gauge the American public’s knowledge of human trafficking as a human rights violation and to gather insight into empathy and attributions towards foreign women forced into prostitution. The study used responses to vignettes to assess attitudes towards women involved in various forms of commercial sexual activity. The vignettes portrayed a fictitious woman in prostitution (“Ana”) and had two independent variables: citizenship and consent. Ana was either foreign (Ukrainian) or domestic (American), and her engagement was either voluntary (sex work) or involuntary (sex trafficking). Participants were 223 volunteers recruited from OSU undergraduate psychology courses. Participants completed various self-report measures: the Interpersonal Reactivity Index (assessing trait empathy), the Belief in a Just World Questionnaire, the Attitudes toward Prostitution Scale, the Attitudes toward Rape Victims Scale, and the Illinois Rape Myth Acceptance Scale. Participants also completed a pilot survey designed to measure knowledge of human trafficking in the United States. As predicted, empathy was highest for trafficked women, regardless of citizenship status. Trafficked foreign women received greatest empathy overall, and American prostitutes received the least. Empathy for Ana was strongly associated with a personal desire to help her, a belief in the government’s responsibility to help her, and interpersonal empathy. People with less empathy for Ana had a higher acceptance of rape myths and more stereotyped attitudes toward prostitutes. Activity in one’s religious community was also positively associated with empathy for Ana and a personal desire to help her. The behavior of trafficked American women was considered significantly more blameworthy than the behavior of trafficked foreign women. Participants endorsed multiple myths and misconceptions concerning trafficking, and the majority of the sample did not know that there were documented cases of trafficking in Columbus, Ohio. As this is the first study of its kind, and empathy has empirically grounded links to prosocial behavior, this line of research may have implications for preventative efforts, information campaigns, social support towards survivors of violence generally and survivors of human trafficking specifically, and increased citizen activism and awareness concerning this global calamity.