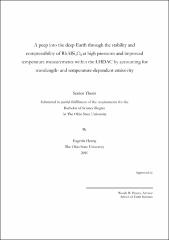 The study of the Earth’s deep interior relies on knowledge of material behavior under extreme conditions, such as temperatures exceeding 5000 K and pressures up to 3.6 million times the Earth’s atmosphere. Physical properties of materials at such conditions can be extrapolated from high-pressure and temperature experiments which can be extended into a depth within the Earth. The laser-heated diamond anvil cell (LHDAC) is one such device that can reproduce the pressures and temperatures of planetary interiors. 87Rb, which decays to 87Sr, serves as a geochemical tracer which is used to determine the age of the continental crust, constrain the age of the Earth’s core and to date the age of meteorites. The decay of 87Rb to 87Sr in particular serves as a geochemical tracer for long-lived mantle processes. While Rb in the crust is stored as a feldspar (RbAlSi3O8), the most abundant mineral of the Earth’s crust, the mineral host of Rb in the mantle is uncertain. Determination of material properties such as the high-temperature equation of state, solid-solid phase transitions, emissivity, and melting curves under deep-Earth conditions is contingent on the ability to accurately measure high temperatures, yet the quality of temperature measurements in situ within the LHDAC are hampered by chromatic aberrations introduced by the diamonds and optics of the system. Advances in the design of temperature measurement circumvent chromatic aberrations (Campbell, 2008), such that systematic errors introduced through wavelength-dependent emissivity dominate the errors in the temperature measurement. Here in this compilation of two projects I report the phase stability and compressibility of a high-pressure polymorph of RbAlSi3O8, Rubidium-hollandite-I, from LHDAC experiments and wavelength- and temperature-dependent emissivity measurements for various metals including platinum, tungsten, molybdenum at atmospheric pressure and iron-nickel alloy at 44 GPa as a means to validate temperature measurements. The high-pressure phase diagram of Rubidium feldspar is similar to that of Potassium feldspar, transforming to the hollandite structure at ~15 GPa, then to the hollandite-II structure between 20 to 30 GPa, suggesting that the host minerals for K and Rb in the mantle are identical. The bulk modulus of Rubidium hollandite-I turns out to be 216 (±6) GPa, assuming K'=4. Platinum, tungsten, molybdenum at atmospheric pressure and iron-nickel alloy at 44 GPa display a decrease in wavelength-dependent emissivity for temperatures ranging from 1300K to 3000 K, indicating that corrections are necessary for accurate temperature assessments. Tungsten does not display temperature-dependent emissivity for temperature ranges of 2500 – 2900 K.