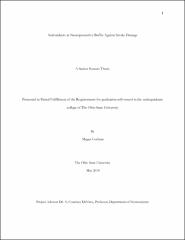 Cerebral ischemia leads to neurological damage and cognitive defects. Restoring blood flow to the brain is the most effective way to limit damage of cerebral tissue; however, reperfusion is also associated with tissue injury in the form of oxidative stress. Oxidative stress is characterized by the generation of free radicals resulting in damage to lipids, proteins and nucleic acids, which in turn contribute to cell death. The antioxidant glutathione is constitutively present in the body and is responsible for neutralizing free radicals produced by oxidative stress. The primary hypothesis of this experiment was that the administration of N-acetyl-L-cysteine (NAC), a glutathione precursor, would act as a buffer against stroke damage. Transient focal cerebral ischemia was induced by middle cerebral artery occlusion (MCAO). All experimental animals were treated with either NAC (150mg/kg) or isotonic saline solution. Our behavioral data indicate that MCAO decreases exploratory behavior and induces sensorimotor deficits including reduced mobility and precision of limb control during walking. The treatment of MCAO mice with NAC, however, improved control and strength in the affected hind limb. Additionally, following stroke, NAC-treated mice showed improved mobility in the affected hind limb. Additionally, NAC treatment produced a trend of reduced oxidative stress as well as reduced infarct volume relative to saline treatment, which likely contributed to improved sensorimotor recovery. Taken together, these preliminary data suggest a role for anti-oxidant therapy in improving post-stroke functional recovery.