Quantification of Brake Disc Runout Due to Assembly and Manufacturing Variations 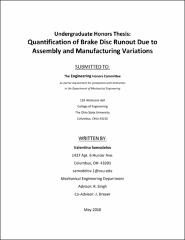 Brake disc runout, which is defined as a variation in the distance of a brake surface to a reference plane, is a key contributor to torque variations. Runout also leads to disk thickness variation by inducing uneven wear of the disc and is affected by assembly and manufacturing inconsistencies. Dynamic frictional torques, as induced by disk thickness variation and runout, could then lead to vibrations in the seat track, steering wheel, chassis and brake pedal under high speed braking events in ground vehicles. This low frequency vibration phenomenon is often known as brake judder, and it poses customer satisfaction and warranty issues. The purpose of this undergraduate thesis is to identify and comparatively evaluate key parameters which cause or affect runout of the brake disc. Controlled static experiments are conducted to investigate several assembly variations. Statistical analyses, including a compensation for the wide variability in the control of the bolt tightening torque, show that the bolt tightening pattern has a significant effect on runout magnitude, while indexing of the rotor with respect to the hub has an effect on the maximum and minimum runout angles. The assembly variations are also studied using a computational finite element model. The model is further utilized to investigate thermal effects of the inherent manufacturing variation of casting core shift. Qualitative analysis of the cumulative effect of core shift and heating due to friction from a braking event illustrates the significance of this manufacturing variation in its effect on both disk thickness variation and runout. The key contribution of this thesis is a comparative evaluation of the parameters that affect runout. In particular, this work should lead to a better understanding of the assembly and manufacturing variation on brake judder and system dynamics.