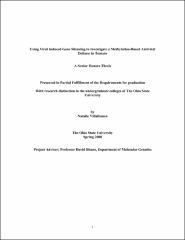 My project will be using a novel virus vector based on the geminivirus Beet curly top virus (BCTV) to attempt to silence genes in plants. Silencing occurs when over-expression of viral genes, and passenger gene segments inserted into the virus, triggers RNA silencing, which results in degradation of virus-derived mRNA. Thus, by inserting a gene of interest into virus vector, the cell will degrade it and all RNA with a similar sequence. One goal of my project is to determine if the BCTV vector is effective in a broad range of crop species, beginning with tomato. A second goal is to determine if the viral vector can be delivered to plant cells using Agrobacterium tumefaciens. The first approach is to silence endogenous genes in tomato that are visually easy to detect. For this we are using a magnesium cheletase gene as well as a phytoene desaturase gene. When silencing of either of these genes occurs, the plant begins to bleach, with leaves turning yellow to white. I have found that the BCTV vector can cause effective silencing of these genes in tomato when vector DNA is delivered by conventional particle bombardment and by A. tumefaciens strain C58. Current work is focused on testing additional strains to see which can transfer the virus vector to the plant cells with the greatest efficiency. In addition, we have collected tissue samples of those plants that appear to have been silenced and will use reverse transcriptase-polymerase chain reaction (RT-PCR) to confirm that mRNA levels of the targeted genes have been reduced. If the genes have been truly silenced, transcript levels should be significantly lower than the control. Our lab has discovered that plant hosts methylate cytosine residues in geminivirus in order to inhibit viral gene expression and replication. An important proof of this defense is that Arabidopsis thaliana plants that have mutations in genes important for methylation are hypersusceptible to geminiviruses. I hypothesize that tomato plants also use methylation as a defense against geminiviruses. Unfortunately, unlike the model plant Arabidopsis, well-characterized mutants are not available in tomato. Therefore, I will use the BCTV vector to knock-down the expression of tomato genes expected to be involved in methylation. Treated plants will then be infected with geminiviruses, and disease progression and virus replication will be monitored. So far, I have been doing in silico research of different genes that have been sequenced in tomato. Because only about 40% of the tomato genome has been sequenced, this has been difficult. However, I believe I have identified genes that will be useful, including homologues of Arabidopsis Argonaute 1 (AGO1) and Argonaute 4 (AGO4). These genes are known to be involved in RNA silencing and methylation, respectively. This project is important for a number of reasons. First, we are using a novel vector. There are other viral silencing vectors available, but they have limitations of size because the virus must replication and spread to silence the gene of interest. Our vector replicates but does not spread. Even so, the signal is still strong enough to cause systemic silencing. This could be a very useful silencing vector, because size of the gene of interest would no longer be an issue. Another advantage is that it allows the analysis of gene knock-down phenotypes in the absence of viral disease symptoms, unlike other available vectors. Second, this project aims to identify genes involved in the viral defense system of a plant that is relevant to agriculture. More specifically, we are aiming to translate the research we have done in a model system (Arabidopsis) to systems that are useful to understand (e.g. tomato).