Prehensile Tail Use during Feeding and Foraging of White-faced capuchins, Cebus capucinus 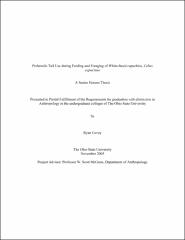