An Analysis of the AFL-CIO’s Union Summer Program: The College Recruited Organizers’ Contributions to the Labor Movement 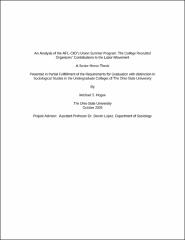