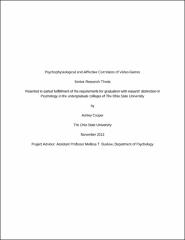 Recent research has examined how playing video games affects young adults, with some evidence that playing video games can have a positive effect on cognition. Mixed results have been shown with mood. The present study sought to further examine the effect of video game play, gender, and “gamer” status on physiological functioning, mood, and cognition. Participants were 82 undergraduate students (31 females, mean age 19 [SD = 1.9]) who played one of four video games (human violence, zombie violence, racing, non-violent) for 30 minutes. Blood pressure, heart rate, and mood were assessed before, during, and after game play. In addition, sustained attention was assessed after video game play. Results indicated that males responded to video game play more negatively than females, and “gamers” had less physiological reactivity to game play than non-gamers. Heart rate was higher among individuals playing human violence or racing games than non-violent games. Finally, males and “gamers” had better performance on a measure of sustained attention. The results of this study have implications for the use of video games in treatments for depression and social anxiety.