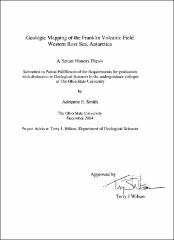 The RVIB N. B. Palmer collected bathymetric and seismic data in the western Ross Sea in January/February 2004 with the specific purpose of mapping neotectonic structural and volcanic features on and beneath the seafloor. The Franklin Volcanic Field (FVF) is an important feature revealed by the bathymetric data. The volcanic field, which is expressed as a regional bathymetric high, is a minimum of 80 km long and up to 40 km wide. As one moves north, the overall trend of the volcanic field appears to curve from N-S to NE. Superimposed on the regional high are the subaerial portion of Franklin Island and clusters of submarine volcanic cones. Franklin Island has been interpreted as the western remnant of a shield volcano and has a single K-Ar date of 4.8+2 Ma. Its submarine morphology is characterized by a steep western flank and an eastern flank that, within the limits of the mapped region, appears to have a shallower slope. North of the island, there are 8 discrete cones, three of which were dredged, yielding basaltic lava, hyaloclastite and tuft. The seafloor morphology in the northern sector of the field is characterized by lineations at several scales, some hummocky terrain marked by circular to oval depressions, and superimposed iceberg scours. Based on morphology alone, the linear features could reflect volcanic ridges, faults, or glacial lineations, or may have formed by a combination of these processes. The origin of the seafloor features within the FVF has been determined through integrated analysis of magnetic, gravimetric and seismic data. Using the spatial associations of the features, this work proposes a reconstruction of the direction of glacial flow during the Last Glacial Maximum as well as maximum and minimum crustal stress directions during the formation of the Franklin Volcanic Field.