The Brazilian Favela: The Case of Salvador 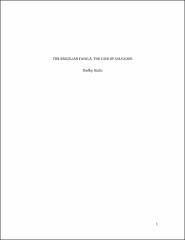 Informal housing residents in Brazil, accounting for nearly six percent of the country’s population, have experienced a difficult history of removal and relocation. Areas of informal housing in cities are the target of nationally funded programs executed by the municipal governments and aimed at relocating residents of informal communities into formal structures. These approaches place residents at a further socioeconomic disadvantage by placing them on the outskirts of the municipality, with less access to public services and limited employment options. As a result, there has been considerable resistance by communities and residents to these programs. Demographic and socio-economic differences, and government political party affiliation create different housing relocation politics specific to particular cities. The city of Salvador, the concrete research focus here, is no exception. Investigation into the political relationships between various actors in the municipality, the development of urban space in the city, and analysis of the informal economic situation in the communities in question has provided a better understanding of the particular politics of relocation there. Local policy and the way that these programs are implemented increases the disparity between informal and formal residents, creating a difficult situation for residents with less power to change their housing circumstances. The question remains how the changing political affiliation of the municipal government, implementation of housing programs, and rapidly decreasing available land for housing will affect the construction of geographic space in the future.